Skip to content
Joining instructions: how to take part in SMOFcon Europe online

Styled over 400 years by the Moors, and enriched by the spice trade in the golden age of its overseas connections, Lisboa is a historic capital, filled with unusual character and charm. The city is an amalgam of 1,000 years of cultural influences, mingled with modern trends and lifestyles. The result is one of intricate and spectacular contrasts, with magnificent views across the city’s seven hills. Lisboa will make a splendid environment for our international convention, and a wonderful visiting opportunity for members able to stay a little longer.

Our venue is the VIP Executive Art’s Hotel,  close to the Tagus riverfront and to the site of the 1998 Lisboa World Exhibition, now known as Parque das Naçōes. This area more broadly is also known as Oriente and is the location of a major transport hub. Our venue is only 500m from Estação de Oriente (Oriente Station), which is three Metro stops from Lisboa’s Portela International Airport. Alternatively, a taxi from the airport to the hotel should take about 5 minutes and cost approximately 6€.

From the hotel, the city centre is about 15 minutes away by taxi, costing about 10€.

The convention programme will take place in the function rooms of the hotel. 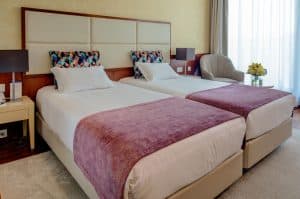 We have arranged special room rates for members of SMOFcon Europe at the venue (though members are welcome to stay elsewhere, if they wish). The nightly rates are:

Lisboa airport is centrally located, only 15 minutes from the city centre. As a European capital city airport, it is served by all major airlines, with daily direct connections to all major European cities, as well as to the US, South America and Africa (more than 50 destinations in total).

If you are looking to use other forms of transport, trains go directly from Spain to Lisboa’s Oriente Station, which is now the main international train station. A journey from London can take 26 hours with 3 changes. Lisboa is also served by cruise ships.

If you’ll have time to spend in Lisboa around SMOFcon, or if you just plan to get out of the hotel for dinner one night, check out our page on visiting Lisboa for tips and ideas for things to do.