SMOFcon is no ordinary convention, and SMOFcon Europe will be no ordinary SMOFcon. In running the convention, we will set out with the four key aims detailed below. In endeavouring to meet them, we will be hopeful, we will work in an atmosphere of mutual support, and we will be willing to fail – always with a secure fallback based on our team’s proven experience. 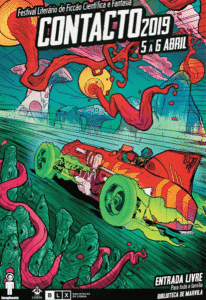 SMOFcon is a convention for people who run conventions and for people who are interested in doing so. The convention’s members come from a background of organising Science Fiction, Fantasy and Horror events covering all media and all sizes, ranging from meet-ups of a dozen people to hundreds and thousands – a diversity that is reflected in the SMOFcon Europe team. We have already also recruited fans who operate with different models, and who run events based on differing societal and organisational systems. For instance, Lisboa has a thriving fan scene, where most SF events take place in public buildings, including a steampunk convention in the Train Museum and Contact and Forum Fantastico in libraries.

With that diversity of background in mind, and with an aim of mentoring and development, the SMOFcon Europe team will be open to fans who are looking to gain experience in all aspects of con running. This will be a safe environment in which to learn, with a team and a membership who understand the desire to experiment and develop new ideas, and with the support of experienced organisers alongside.

The final result of our team’s work will be the convention itself. SMOFcon Europe will have three days of scheduled programming based in the convention hotel. Friday will see longer workshops, with in-depth coverage of material. Over the weekend, workshops will continue alongside small discussions, expert groups and panel discussions. We are also looking at the social side of the weekend, with chances to relax, meet friends and make plans for the future.

Working with other conventions

We will not presume to ask other conventions to march to the beat of our drum for the likes of the Fannish Inquisition. We realise that, for many, it is a key event, and we will be privileged to host a fannish presentation and Q&A session for current and future bids. We want to make it easy for groups to participate, and will use the 20 or so questions developed over several years by Esther MacCallum-Stewart and Colette H. Fozard, which have been used by a number of Worldcon bids, and which we have used in our own presentation.

It is important to the team that, as fans, we are respectful of all cultures, especially as we see both SMOFcon and Worldcon going to countries for the first time. Dublin 2019’s Traveller outreach resulted in brilliant engagement by members of that community – people who are commonly marginalised and discriminated against. We need to understand and engage with the cultures of the countries we visit, and we need to consider our offerings to members not just in the context of our own con-running experience and traditions, but also in light of the way they will be received by others.